In 1998 Genti Daci saw opportunity in Albania–or at least the lack of internet access in the post-communist country. Less than a decade after he co-founded ABCom with some friends, the telecommunications company not only provided internet and cable to businesses in and around Tirana, Daci says ABCom provided internet service to U.S. President George W. Bush and his staff on the first official state visit of the world leader to the Western Balkan country.

That 2007 visit provided the Albanian entrepreneur with the opportunity to meet with a representative from Southeast Europe Equity Fund II, a U.S. equity fund, Daci says. With an initial investment of over 1 billion leke (around $9,3 million) from them, ABCom has quintupled its revenue, he says, making it the second largest telecommunication company in the country of roughly three million people. He describes having had a lot of optimism about Albania’s development.

Figures dating from April 2018 on the Albanian Investment Development Agency (AIDA) website indicate the type of investment Daci is referring to, foreign direct investment (FDI), increased by more than 43 billion leke (around $400 million), between 2011 and 2016. While AIDA stated that “the focus for the future development of the Albanian economy will remain on attracting FDIs,” and while the Albanian government has implemented a new “strategic investment” incentives program to do so, investors from one country in particular have not been taking the bait.

Despite pro-U.S. sentiments in the Balkan country, where statues of U.S. presidents and presidential candidates grace public squares, U.S. companies appear to be favoring Albania’s neighbors. That’s the conclusion of a two-month investigation by the Albanian Center for Quality Journalism and the U.S.-based New England Center for Investigative Reporting.

While AIDA counted U.S. name brands like Coca Cola and KFC among 25 “success stories” of U.S. investment in Albania in a post dated 16 August 2017, investors from the world’s largest economy are few and far between in Albania and some have closed shop in recent years, including the Albanian Sun Petroleum franchise (licensed by Gulf Oil International).

U.S. investment in Albania represented about one percent of total FDI stock–or the accumulated invested capital of one country into another–in 2017 and the investment seems to be declining in recent years, dropping from 11.1 billion leke($103 million) in 2014 to 8.9 billion leke (around $83 million) in 2017, according to data from the Bank of Albania. 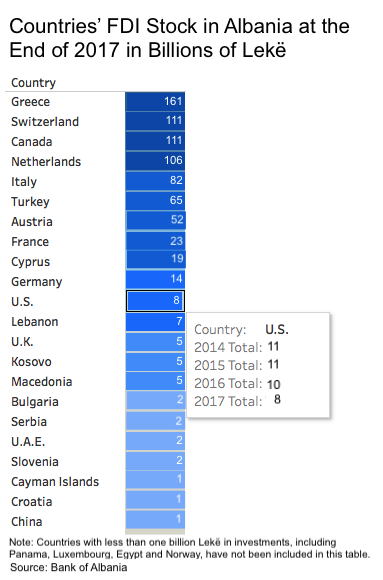 On the other hand, there are more American companies elsewhere in the Balkan region than there is in Albania.

The U.S. Embassy in Serbia confirmed in an email that U.S. investment there were $4 billion since 2000 and that U.S.-owned companies and franchises have employed more than 19,000 people in the former Yugoslav state. By contrast, the American Chamber of Commerce in Albania (AmCham) listed 55 “U.S.-owned and -affiliated” companies in its 2018 Yearbook, though that number is already outdated, given the previously mentioned departure of Gulf Oil and Sheraton Hotels from the country.

As the former Vice President of AmCham in Albania, Daci knows first-hand why U.S. businesses are reluctant to invest in Albania. He was briefed about the AmCham’s annual trips to the U.S. which were focused, in part, on trying to attract new U.S. investors to Albania.

“All of them were afraid to invest in the country,” Daci says of the potential U.S. investors. “All of them.”

Daci, who was the business lobby’s vice president from 2014 to 2017, says the chamber’s representatives had trouble selling U.S. investors on coming to Albania.

Daci emphasizes two main issues creating obstacles for businesses like his operating in Albania: corruption and the government’s failure to protect businesses who do play by the rules.

Investors from the U.S. are apparently not the only ones with these concerns. Daci recalls a representative from one Poland-based investment fund that was considering investing in ABCom who called Albania “an exotic country.”

“Exotic in terms of risks,” Daci adds. He says the Polish fund decided against investing.

The Cost of Corruption

As U.S. Investment in Albania has fallen, so too has the country’s rank in Transparency International’s Corruption Perceptions Index–eight places between 2016 and 2017. Albania now ranks as the second most corrupt country in the Western Balkans after Macedonia.

According to the U.S. State Department’s 2018 Investment Climate Statement for the country, “major foreign investors” claimed they were pressured into hiring politically connected subcontractors and expressed concerns about their ability to comply with the U.S. Foreign Corrupt Practices Act, which makes it illegal for U.S. citizens to bribe foreign officials.

These concerns are nothing new to the U.S. State Department, which, in a 2016 statement, called corruption “the largest deterrent of U.S. investment in Albania.”

Even before that, in a 2010 diplomatic cable to the U.S. State Department published by Wikileaks, then-U.S. Ambassador to Albania John Withers III said that, despite the pro-U.S. sentiments in Albania and reforms by the Albanian government aimed at improving the business climate, economic roadblocks including “widespread corruption” within Albania were having an effect on investments.

“Corruption has a corrosive impact on both market opportunities overseas for U.S. companies and the broader business climate,” wrote the ambassador. “It also deters international investment, stifles economic growth and development, distorts prices, and undermines the rule of law.”

Deputy Chief of Mission at the U.S. Embassy in Albania, David Muniz, said in a July 2017 interview with Gazeta Shqiptare that “the corruption issue is very pervasive here. It creates an impression that this is a place in which, perhaps, you do not want to do business particularly for large companies, which have options.”

Since at least 2011, development funding from the U.S. has focused on encouraging reforms to Albania’s judiciary, which USAID has  described as having “most corrupt” as its epitaph.

Although judicial reform enacted by the Albanian Parliament in 2016 established new justice institutions, such as the Special Prosecution Office Against Corruption and Organized Crime, or SPAK, and would include a special unit for investigation and a special court for high level corruption and crime cases – almost two years have passed and not one of these is yet operational.

After eight years of trying to expand his business to the southeastern city of Korca, ABCom began the process of putting up new cable lines there last summer. Daci alleges that one of the local competitors kept cutting them down, which cost ABCom over 10 million leke (around $93,000) in repairs.

“Forget about cables, you just put up another one,” he says, “but we just lost customers, we lost service, and we paid a lot of people working there.”

ABCom’s lawyer presented the Albanian Center for Quality Journalism with a letter sent to Korca police in July 2017. The letter claims that video evidence shows an employee of MRM, a local competitor in Korca cut ABCom’s cables. Daci says that the municipal police and prosecution office did not accept the evidence he offered them.

He says ABCom’s cables have been cut three more times since then.

Unable to trust local law enforcement, Daci says ABCom had to hire private security to protect its investments in Korca.

In response to these allegations, the Korça Municipal Police said ABCom’s video evidence was examined, but the perpetrator could not be identified. The police also said that they have been patrolling the areas where ABCom provides service, working extended hours for the past two months.

Contacted through Facebook, MRM declined to respond to the allegations against them.

“We only give responses to those who have subscribed to MRM in Korca,” the telecommunications company replied.

A company testimony the presence of bribes

In a separate incident, a source, who asked to be called “Klodi” for his protection, alleges that an official working for the Audiovision Management Authority, or AMA, approached him requesting that he pay almost 400,000 leke, (around $3,700) when he went to Tirana in January to have his small cable company’s license renewed—a process which he says takes place every six years at a cost of 40,000 leke (about $370).

Bribes known as “bakshish” have a long history in Albania, going as far back as Ottoman times. Translating directly from Turkish as “a tip,” bakshish has traditionally been paid under the table to show appreciation for hastened service.

“The problem is this,” says Klodi, “if I give them bakshish once, they will always ask for it.”

Klodi claims he is going bankrupt: he lost at least 400 customers in May alone and two of his four employees now work part-time so that he can afford them. His small-town cable operation, located 30-minutes outside of Tirana, is unable to compete with the cheaper packages of competitors with pirated channels, who do not pay the necessary licensing fees for those channels, he says.

AMA lacks an account on e-albania.al, which Klodi alleges to be intentional. According to its website, the National Agency for Information Society-administered e-Albania portal was developed to increase transparency and allows individuals and businesses the ability to fill out licenses or permits online.

By forcing cable providers to come into Tirana to do paperwork, AMA officials, Klodi says, can request bribes in person. USAID has called online government “E-Systems” a “key tool” to increase transparency and fight corruption.

AMA responded by e-mail to these allegations, saying it would need the name of the accused official and recommended that this case be brought before the relevant institutions.

While Klodi says that he will bring AMA to court if necessary, he also describes bribes as just a part of the “Albanian reality.”

“Corruption is the A to Z of life in Albania,” he says.

Foreign investors have trouble getting from A to B

“We’re not saying that it’s not a problem,” said Ljubica Nedelkoska one of the author about corruption in a phone interview, “but we’re saying that if you take away corruption, there are still other problems stopping investments.”

One of those problems, cited by the authors of the Harvard report, is that AIDA, Albania’s investment promotion agency, has been chronically underfunded and has never been properly staffed.

AIDA’s executive director Sokol Nano was unavailable for an interview.

While corruption was among the top 10 concerns for AmCham’s members currently operating in the country, the “overall tax level” ranked as the greatest concern.

“What makes taxes so challenging for the AmCham’s 250 member-companies is the country’s ever-changing and unpredictable tax laws. Local tax laws, for example, have changed 14 times since 2007,” said Eneida Bezhani, executive director of Albanian AmCham.

“With this ever-changing regime (tax law), the problem is that they cannot plan accordingly and accurately,” says Bezhani.

Dr. Selami Xhepa, a research manager for the Albanian Center for International Trade, a project funded by USAID, agrees that the tax situation in Albania is not enticing to foreign investors.

“The fiscal burden compared to the other countries in the region has been high,” says Xhepa of Albania’s taxes, “and on the other hand the fiscal tax administration has been problematic, leading to even more tax increases.”

“In general, foreign investors–not only Americans–prefer countries like Serbia because it is an even more interesting market,” says Xhepa, adding that Serbia is a bigger market and has a more stable and sophisticated economy.

U.S. companies are not the only ones looking elsewhere. Daci says key personnel at ABCom are talking about leaving the country for Germany, the U.K. and Canada. He says five of his best engineers have already left.

AUTHORS’ NOTE: All USD and Lek amounts have been converted based on their rates as of 24 July, 2018

* The first photo at the beginning of the article, on the right the building of the former Sheraton hotel in Tirana. Photo: Josh Coe