In four years, 103 schools were closed, education fails to help the integration of returned children

Elisa Jakimi, is an 18-year-old from Dibra, who had to finish high school during the last school year, in order to continue her dream of higher education, a dream that was not realized due to a decision that she and her family made in October 2021, to leave for the neighboring country, Italy, followed by the school’s decision to expel her.

Elisa stayed in Italy for about two months, with the aim of an important ophthalmological visit and the hope that she could enroll in school there. But things did not go according to plan and at the beginning of December, she returned to the high school where she had studied for two years, this time to finish her last year, the one of graduation.

She says that after she attended school for about three months and submitted all the projects, took the back exams, at the end of the first semester (around March), one of the teachers refuses to give her a grade, thus sending to waste her school year.

Despite efforts and complaints to the Ministry of Education and the Regional Directorate of Pre-University Education Durrës, Elisa says that nothing changed. Now, while her schoolmates finished their graduation exams, she is waiting for the start of the next school year.

“In crisis for students, but they make exceptions, even graduates! When an immigrant returns to the classroom of the school again, the wildest justifications are thrown around, such as the number of absences, crossing the border abroad, refusing you as a student of that school. But the moment an immigrant is added to those classes, they are given a letter of expulsion  as a gift, justifying it by completing the maximum number of absences. I am very disappointed, but also happy that I left for a better life, and when the door was closed to me by a foreign country, I was also shut out by my school, where today I was supposed to throw in the air the graduation hat with my peers”, says Elisa Jakimi.

From the statistics of the General Directorate of Pre-University Education in the school year 2021-2022 compared to the year 2018-2019 in the country, the number of students has decreased by more than 38 thousand and about 103 educational institutions (public and private) have closed their doors, where the leadership is held by the institutions in rural areas.

This article has collected data from the 4 Regional Directorates of Pre-University Education (DRAP), more specifically of Durrës, Korça, Lezha and Fier, to see in more detail which region has the largest depopulation of schools, specifically for 4 years 2018-2021, both for public and private institutions. At the end of the collection of statistics, it turns out that the region of Elbasan has the biggest drop in student numbers.

From the statistics made available by this directorate, as well as compared to other regional directorates of pre-university education, DRAP Korçë has the largest decrease in students from 2018-2021.

A number of local offices in this directorate have a decrease in the number of students by over 1000 from the school year of 2018 to 2021. Elbasan is on the list with the most students, 6848, leaving during this period, followed by Korçë-Pustec with 5873, Berat 5241 and Librazhd 4194. Regarding the number of schools and teachers in this regional directorate, the data available is not complete.

The local education office of Kavaja, Kamza, Krujë, Mat and Durrës have the highest number of student dropouts ranging from 5310 in Durrës to 2288 in Krujë, while the number of students in other local offices is below 1000. 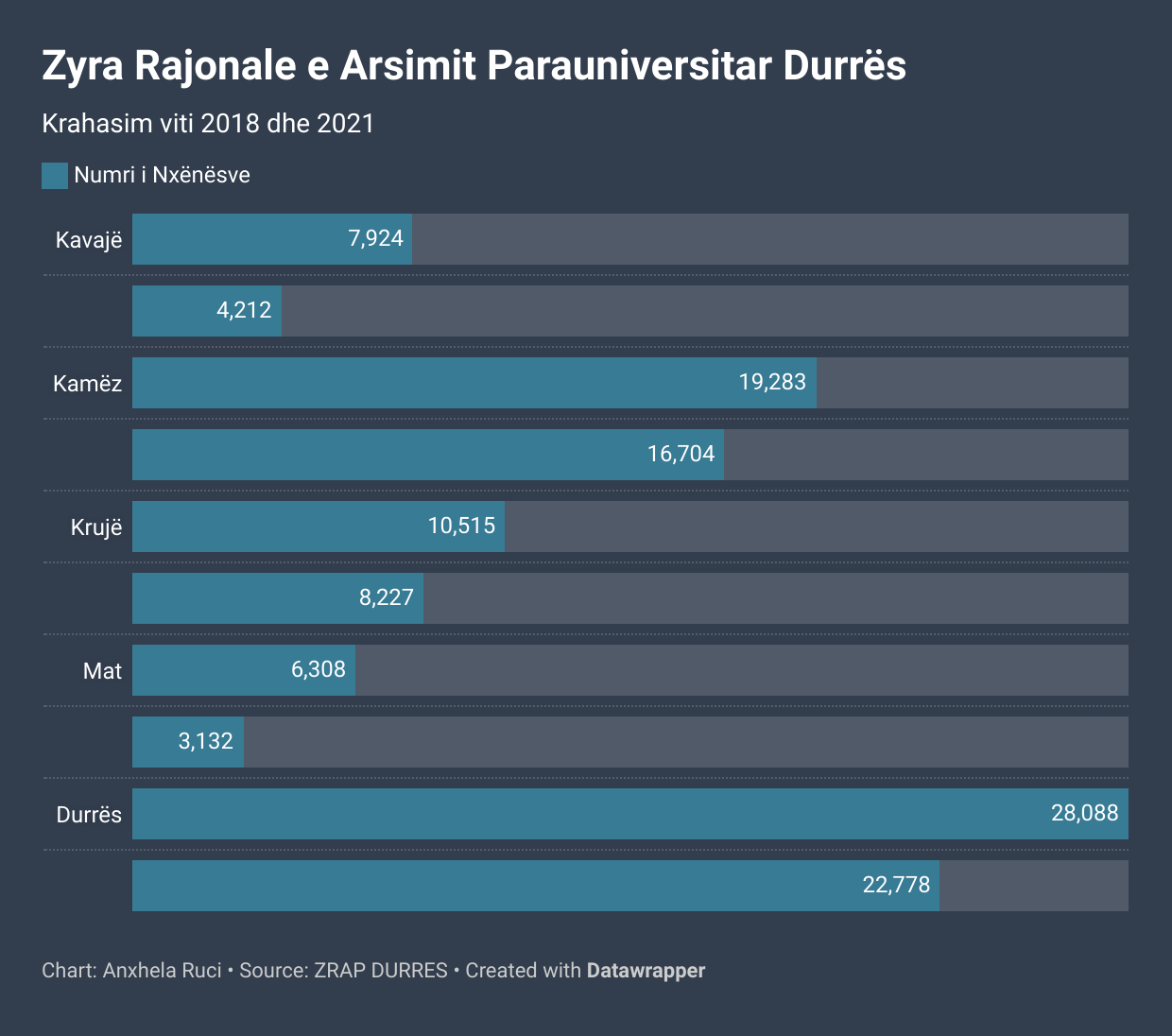 However, this educational office, among other things, also has positive numbers, which is expected since the capital, Tirana, is part of it. The Tirana education office has a positive record for the years 2018-2021, since unlike other directorates, the number has increased by 7788 more students.

DRAP Lezhë is the next directorate after Korça and Durrës, which has the biggest drop in students, teachers and the closure of educational institutions. The regional directorate of Lezha includes: Lezha, Kurbin, Mirdita, Shkodër, Malësi e Madhe, Vau i Dejës, Pukë-Fushë-Arrëz, Kukës, Has and Tropojë.

Even this directorate has recognized a high number in the cases of school depopulation, where the biggest consequences are observed in Shkodër, Kurbin and Kukës. In these local education offices, the number of students registered for the school year 2021-2022 is several thousands lower compared to the school year 2018-2019, where Shkodra holds the lead with 2173 fewer students. A phenomenon that can be noticed from the data made available by DRAP Lezhë is that although in some local offices such as Lezhë, Kukës, Has and Malësi e Madhe there has been a decrease in students, the number of teachers has increased.

According to information made available by DRAP Lezhë, it cannot be specified whether the drop in the number of students is in 9-year schools or in high schools, as these statistics vary depending on the local offices.

During the 4 years in DRAP Fier, about 78 educational institutions have been closed, but unlike other local offices, even though Vlorë-Himarë has a decrease in students from 2018-2021 (1078 fewer students), the number of schools has not decreased.

This phenomenon has an explanation from DRAP Fier, collective classes. “In the rural areas of some municipalities, there are schools with an extremely low number of students, who study in collective classes. Due to the concentration of such schools in larger schools, providing a quality education in separate classes for their students, some schools have continued to operate only within the preschool cycle. These schools and others that have not had any students are not considered officially closed”, it is stated in the official notice of this office.

The President of the Independent Education Union of Albania, Mr. Nevrus Kaptelli, explains that the decrease in the number of students remains one of the main concerns of this union, which were also raised in the meetings that this union held with the Ministry of Education.

“From the information of our basic structures, we have been informed that from year to year the number of students who register in the first grades is constantly shrinking, where in some local educational offices, less than 50% of those appearing in the civil register are registered in school. The phenomenon of depopulation of schools in recent years is also observed in Tirana, where classes are closed every year. Since our requests for increasing the education budget from 3% of GDP to 5%, made repeatedly for 9 years, have not been taken into consideration by the government. Solving the problem has become more difficult now. Due to insufficient investments in education, equipping schools with modern tools, increasing teachers’ salaries, etc., the teaching profession has become one of the last appealing professions among students. An indication of this is the continuous decline in the number of students in teaching branches, and the closure of these classes in some faculties “, says Kaptelli.

He further clarifies that the decreasing number of students in pre-university education is also accompanied by the remaining out of the system of teachers who, in order to cope with the significant decrease in students, have to shorten the teaching hours or are forced to move from one school to another to complete the work schedule.

“I believe that there are causes that are directly related to the quality of education, this is reflected because knowledge is increasingly devalued and the “graduation diploma” is gaining value as a certification instrument. Parents feel insecure to send their children to preschool education institutions with unqualified, untrained and lack of knowledge graduates who have entered the educational profession, even more so after several disasters that have appeared in the media, which prove the lack of preparation of the educational staff with the necessary components for managing difficult situations. The lack of educational institutions in rural areas is problematic, as a family may have to walk several hours to send their child to the nearest kindergarten,” she says.

Ruçi says that there are also social causes that influence and for this, she suggests, there should be a coordination between state institutions, to help with the education of children in those families that have economic difficulties and the inability to provide children with the education tools necessary for them.

Among other things, a main problem in pre-university education is the closing of institutions in rural areas and the concentration of students in urban areas.

Even this phenomenon, according to teacher Arjola Alla, is associated with lower performance of students coming from rural areas, who often find it difficult to adapt to the new environment.

“Students coming from rural areas reflect their economic difficulties, a good part work to cover school expenses, as well as have difficulty in adapting the first months. Some show up late for the first class because they live far away and have no way to commute to school, and they express low self-esteem compared to other students”, she explains.

33 thousand graduates took part in the state graduation exams of the school year 2021-2022. What was evident at the end of the exams was the low number of graduates with the maximum grade (4 excellent in the language-literature exam; 234 excellent in the math exam, 611 excellent in the foreign language exam) and the high number of those who failed, at least one of the four compulsory exams.

The Minister of Education, Evis Kushi, proposed that next year, for the first time, the revaluation of the state graduation exams be introduced as a practice, while the graduates aiming for the branches of medicine and dentistry will undergo an electronic test in Tirana.

Share
Facebook
Twitter
WhatsApp
Previous articleForeign Direct Investments, Albania lags behind its Balkan neighbors. The recommendations are numerous, but the steps taken are non-existent
Next articlePersonal data – chronicle of a “nonexistent” crime; Investigation of data leaks, too little, too late
Investigative Journalism Lab