Three years ago, Romana Vllahutin, former head of the EU delegation in Tirana from the village of Shishtavec in Kukes, called against the construction of hydropower plants. She urged residents of the area not to move from this country, where EU funds have been invested in the reconstruction of the road connecting the area with Kosovo and Northern Macedonia, and the tourist and economic potential is extremely high and the natural beauties are numerous.

Part of the Korab – Koritnik Natural Park, the Luma River from an abundantly flowing river has been turned into a waterless stream, as a result of the construction of these hydropower investments. Hydropower plants are of the “BOT” type that function as a single, giving and taking water from each other, carrying out the maximum use of water, and turning the riverbed during the period of use, into a dry desert without life.

The last, Pobreg hydropower plant was built by the concession company “Energy Plus sh.p.k.”.

Residents of the areas where the tributary branches of the Luma River cross have for years opposed the construction of hydropower plants. In the villages of Topojan and Borje, residents are concerned about the damage to the river, but seem to have surrendered and have no desire to comment further on the construction of HPPs.

“It is not the time to talk about hydropower plants now. We have protested in 2018 in Tirana against the construction of hydropower plants. We can’t do anything now. We cannot deal with people with”, says a resident of Topojan who prefers to be anonymous.

Construction permits issued on February 2, 2018, by the Territorial Development Agency for five new hydropower plants: “Zaje”, “Tujan”, “Xhaferraj”, “Kollovoz” and “Novoseja”, within the Korab – Koritnik Natural Park have encountered the repeated opposition of the inhabitants of the area. On the eve of the election campaign of April 25, 2021, in an open meeting with residents, the mayor of Kukes, Safet Gjici promised residents that these HPPs will not be built.

“A few days ago, Safet Gjici was here in a meeting with residents. He told us that the new hydropower plants will not be built even though the permits have been issued”, says the resident of Topojan, while adding that no one has consulted with them about the hydropower plants.

Investments in infrastructure are missing, but not in hydropower plants

Krenar Bilali, a resident of Borja, says the construction of hydropower plants has not improved the livelihoods of locals. The problems continue to be the same as they were before they were built.

“The vast majority of residents have fled. They went to Germany and European countries. A hydropower plant has been built in Borje and the inhabitants surrounded by the mountains do not have drinking water, we also have problems with electricity. Even on the road of Borje, which is in miserable conditions, they have not done a thing about it”, says Bilali. 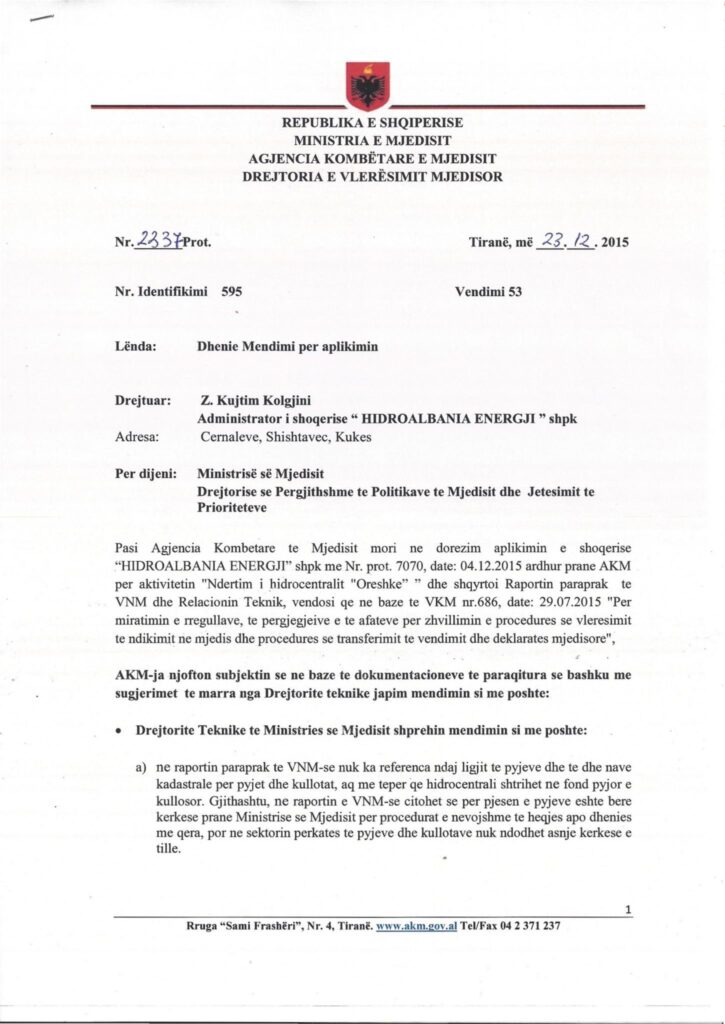 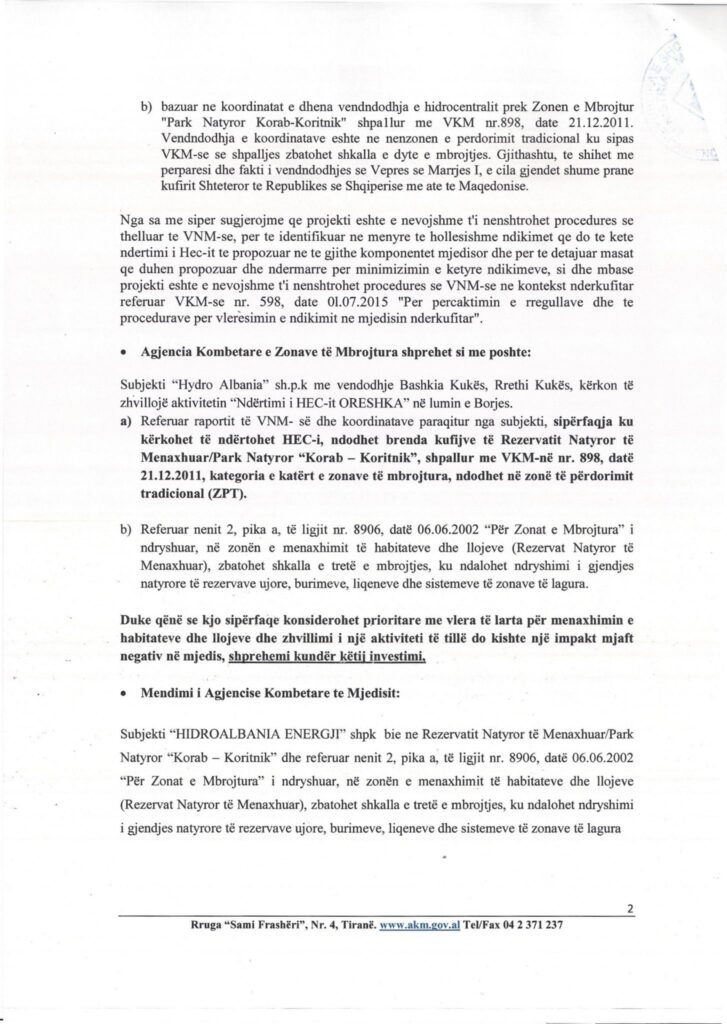 The National Agency of Protected Areas for Environmental Impact Assessment (AKM) has been against the construction of the “Oreshka” hydropower plant. In response to the request for information, the agency considers this area “with high values for the management of habitats and species and the development of such an activity would have a very negative impact on the environment. The Environmental Impact Assessment (EIA) states that referring to the law “On Protected Areas” for this area the third level of protection is applied, and it is forbidden to change the natural state of water reserves, springs, lakes and wetland systems, and how such, investments of this nature are not allowed.

Olsi Nika, director of EcoAlbania, points out that the hydropower plants built on the Luma River are problematic because the concession companies do not implement the contract to release a quantity of water into the river for what is called ecological flow and lack of biological corridors.

“The first problem is the 80% fragmentation of the Luma River. With this fragmentation practically as an ecosystem it has lost its natural functionality and integrity because it has lost what is called the “longitudinal connection”. “Luma” is no longer a river, but a regulated hydropower cascade. Concession companies do not enforce the contract to release a quantity of water into the river called the ecological stream. The second problem is with biological corridors. “Biological corridors are located in the dams of hydropower plants, but they do not always have the right amount of water to enable fish and other living things to pass”, emphasizes Nika.

He also dwells on the economic effectiveness of these investments.

“Building all those hydropower plants for a small amount of energy of only 20 Megawatts, which does not help much in supplying power to power stations and destroying the whole river for only 20 Megawatts of electricity is negligible as a quantity. “A whole river breaks down for so little energy gain”: says Olsi Nika.

The Luma River has a variety of 26 fish, ranging from the trout of the Western Balkans, carp and catfish. The introduction of the entire flow of water into the pipes has made this fauna no longer exist today.

Biologist Arben Palushi has repeatedly made expeditions in the river and confirmed the presence of fish, fish that are no longer there. Despite efforts to build survival pits, Palushi along with other experts failed to save the endemic creatures of this river.

In the upper part 1000 – 1500 meters “Luma” was inhabited by trout from the streams of the Western Balkans. “Now that the hydropower plants have been built and the water enters from pipe to pipe, from 22 to 26 species of fish according to the expeditions we have made, now everything is sterile because the water passes from pipe to pipe”, says biologist Palushi.

Concession companies in addition to introducing water into the pipes violate the points of the contract by throwing chlorine into the river to clean the pipes that occupy unicellular algae.

“Wearing algae reduces the speed of movement, because it creates friction and creates turbulence. This affects the amount of energy produced. For this reason, they wash the pipes with chlorine, but chlorine destroys life. Firms have not only killed the fish, but they do not try to remove the dead fish anymore”, says Palushi.

The National Inspectorate of Territorial Defense is the authority responsible for inspections at these hydropower plants. Only after consecutive requests of ACQJ for information on the state of these investments and their impact on the ecosystem of the Luma River, addressed to IKMT and the Regional Directorate of IKMT Kukës, the latter started the necessary inspections against these concessionaires, responding to the request for information in part.

According to this institution, the necessary inspections were carried out along the Luma River, where it turned out that the concession companies that have built HPPs in the riverbed were operating, two of which do not meet the requirements of the Environmental Permit, but without determining that in to what extent other companies met the conditions of their license.

IKMT Kukës explained that HPPs “Orgosti” and “Pobregu” had ecological flow, through which a certain amount of running water, according to the definitions in the concession contract, passed unused and free in the natural bed of the river, thus ensuring the preservation of the ecological chain. Meanwhile, for HPPs “Topojan”, “Bele” and “Orgost 1” used 100% of the water of the river cascade, thus destroying the system and leaving the riverbed in the segment that these works are occurring, dry and lifeless. Despite this statement by IKMT, it was not made available what will happen to these concessionaires who have caused irreparable damage to the ecological system of the river “Lume”, and despite claims that part of the investments have stayed in the contractual forecasts and environmental obligations, a visit to the mouth of the river “Lume” in that of the “Drini i Bardhë” near the city of Kukës, shows a completely different landscape: a deserted river bed, with stones that have not seen water running on them for years, even during the winter season.

The water that once flowed into the Luma River, one of the largest in the area, now passes through pipelines to generate electricity, the lack of which locals still often suffer from. The lives of the inhabitants living along this river have not changed. Their future does not look better, while the life of the living things of this ecosystem belongs to the past!