Reconstruction in Kombinat: Residents, have no information about the future of their homes and businesses

In the area of Kombinat, in Tirana, three years after the earthquake of November 26th, 2019, construction for the reconstruction of apartments has not started yet.

Alfred Pietra is one of the residents of the Kombinat area who seeks all possible information about the fate of the area where he lived until the moment of the earthquake three years ago.

” I get most of the information from social media and television,” he said. – We are the owners of a building. How is it possible that we were not even informed about the demolition of the building? Today, we need to know how to act and what will be done with us. All of these had to be on paper, written, signed by a titular, who could be the mayor or anyone else. We have no information at our disposal for this. We live in a country where you are fined for a tax coupon, and your house is demolished and you are not given any documents,” said the nervous Alfred Pietra.

We live with hope. We have no documents in hand

Ergysa Osmanaj left her apartment a day after the earthquake. She received a rent bonus of 22,000 ALL from the municipality. “We are a family of three,” she says. “So far we live only with hope, but we have no documents in hand.”

Residents, who have agreed for their houses to be demolished, also complain about the lack of information. According to them, the only solution for them was to accept the relocation to the new neighborhood, which is rumored to begin building very soon.

“We do not have any document, no letter, that provides us with information on the reconstruction. We have asked the Municipality of Tirana about the reconstruction process, if we will have our apartment, on the land where we had it and we have not received any response. We have been told that reconstructions will be made in the new neighborhood, which is supposed to be built at the “Textile Factory”. We have no other choice, we will accept the new neighborhood that will be built. We hope to get it there”, – says the resident of the Kombinat area, J.H. who requested to remain anonymous due to fear of repercussions.

Dissatisfaction with the assessments

Residents of the Kombinat area are dissatisfied with expert assessments as well.

“Experts in the field have come to evaluate it [their home] , but I have not seen a real evaluation, as I think they should have done surveys. They just took a look and that’s it. This did not seem like expert work to me. I would agree to demolish it, but the form should not have been like this,” says Alfred Pietra.

Edmond Cata was the building administrator and waited for the experts to accompany them. He is dissatisfied with the first expertise assessment.

“It was just on paper,” he says, “because no one came forward to evaluate it .  The first expertise was made in the office, as the building has four floors and on paper it results to have five floors. ”

The former administrator of the building is satisfied with the second expertise.

” It [the building] was assessed correctly.”

Edmond also has court history with the building he resides in. He and other residents say the decision to demolish the building was unfair. The Administrative Court ruled in his favor and ordered the demolition suspended.

“I read the decision of building 146, that is, the building where I live and the one in front of me. I verified that the damages and repairs for both buildings were identical, what differed was only the cost. In this way I wrote a petition and sent it to the Municipal Council of Tirana. So far, no answer.”

Residents privately hired experts for a second expertise. The assessment this time was different.

“The results did not get a DS4 rating (damage rating 1-5: the higher the rating the more damaged the building), on the contrary, they got a DS2 rating and the cost of repair was also very big. We then went to the court, which suspended the decision to demolish the building, until the details were substantiated. In the third phase, the court then conducted another expertise and overturned the decision of the Municipality. The government used the earthquake to strengthen a thought, an idea, a plan to demolish these buildings and to take advantage in this case. “In order to justify the permission given by the Municipality, these buildings had to come out over 70% damaged, in order to demolish them, so they took the data from the other building “copy pasted” them, because they think the citizens are uneducated people that can’t read”, – says Edmond Cata.

Expertise of the building no. 146 (In Albanian)

Vera Shehu worked for years in her business, in an aesthetic center. The only announcement she received recently from the Municipality of Tirana was the announcement for the demolition of the building where she was doing business, on January 25th of this year. 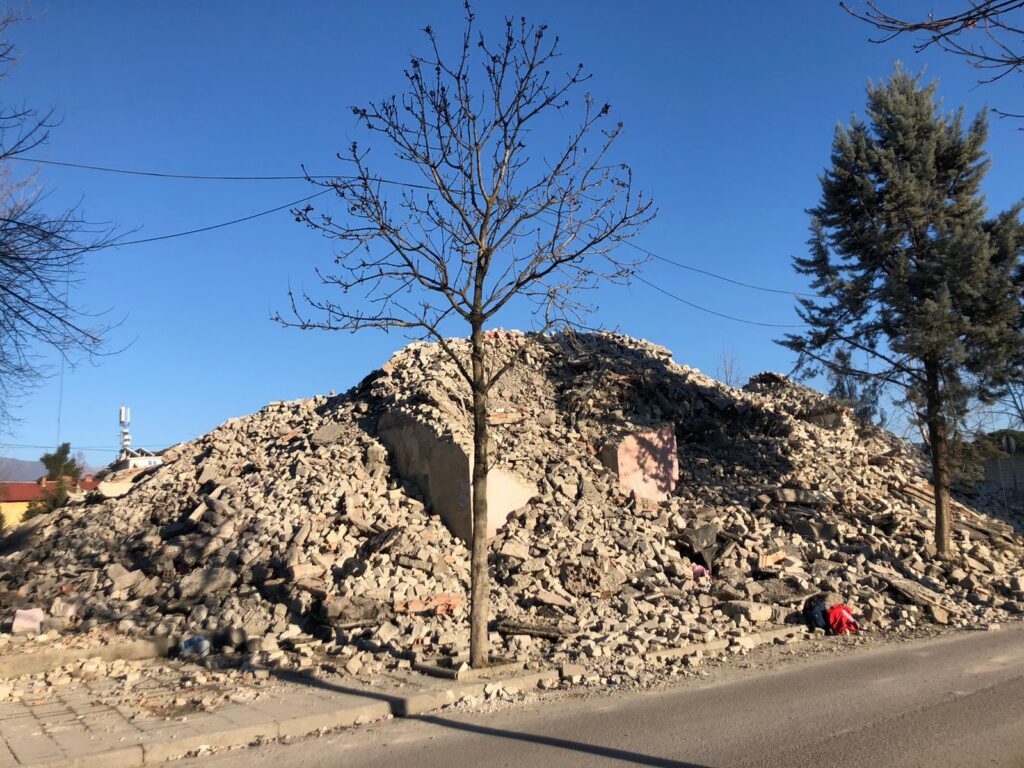 Photo before and after the demolition of the business

“I officially received communication from the Municipality of Tirana only on January 20th of this year, when the decision came to me to demolish my business. The announcement was today for tomorrow! What could I do in such a short time?! I talked to them and asked them for at least 2-3 days to vacate the business. I also asked in Municipality Unit no. 6 here at Kombinat what will happen with my business. I have not received any concrete answer. They tell us we do not have a decision for businesses. They raise their hands in the air and look at us with regret. We do not know where to go and what to do. This is the situation,” said Vera Shehu.

Some of the residents are still unclear, whether the reconstruction will be done in the place where it was. Some are aware that they will be relocated to the “Textile Factory”, but the lack of information remains a constant concern.

The Albanian Center for Quality Journalism addressed the Municipality of Tirana through an official request for the reconstruction process, to learn the beginning and completion of works in this area.

“The General Directorate of Public Works is not managing works for the reconstruction of houses damaged by the earthquake of 26.11.2019, in the area of Kombinat. In the Administrative Unit no. 6, following the process of reconstruction and housing of families in need, a new area is being built in Kombinat, which includes parts of the urban, suburban and rural environment of the territory, which guarantee sustainable development and adequate housing for residents affected by natural disasters. In contrast to the existing dwellings, damaged by the earthquake of November 26, 2019, the new neighborhood aims, not only to shelter residents, but also to regulate the social life of residents who have lost their homes in the earthquake.” – was the official response of the Municipality.

Meanwhile, on 06.10.2021 the government took a decision “On expropriation and temporary use of property – private property – for public interest” in the area of Kombinat.

For this, the ACQJ addressed the Municipality of Tirana with a request for information on the public interest and expropriation of residents in the area of Kombinat, but until the moment of publication of this observation there is no answer.

Currently, in the area of Kombinat there are 1443 families on the forms of those affected by the earthquake: “ 1443 application forms were sent to the Directorate of Social Housing by the Administrative Unit no. 6, of which 1402 are beneficiaries of the decision of the Municipal Council and are currently treated with the payment of rent, 1187 families ”.

The Minister of Reconstruction, Arben Ahmetaj, has given different deadlines for the completion of the “consequences of the earthquake”. On March 16, 2021, Ahmetaj said: “Reconstruction is moving fast. We will keep our promise that in the spring of 2022 there will be no sign of damage from the November 26 earthquake.”

At least in the Kombinat area it will be difficult to keep this promise. The process of rebuilding the demolished houses has not started there yet. The government program still reiterates that in the spring of 2022 there will be no trace of the earthquake.