Young people are giving too little space to reading. In the special survey, within this article, this fact was reinforced even more with the reality we face today. showed a significant decrease, related to the interest in the book that is accepted by 78.3% of respondents. To a large extent, they claimed that technology and other priorities have left no room for books.

Limited time, technology and book costs are some of the reasons for this decline. “The book is expensive due to the cost of production and tax between 15-20%. The high price has made it impossible for Albanian families with parents with low and/or secondary education to have a library in the family, which reduces the possibility that their children will be educated with the culture of reading, says one of the respondents.

Another argues that working long hours prevents parents from accompanying them to neighborhood libraries and being regular visitors. “The lack of information and the limitation of funds lead to a decline, and at these rates it will be difficult for us to become a society with the right incentives to grow and encourage others to read. An average young Albanian does not find pleasure or benefit from after-school reading “, argues another.

Gentjan Tufa , a young man who reads regularly and is fond of books, admits that the relationship with reading is never constant. “It depends on physical time, the quality of books, suggestions from people who read a lot. Reading has made me smarter, it hasn’t let me feel alone or lost, it’s helped me get to know myself and others better, I’ve made many friends with whom we share the same addiction: reading. Reading is encouraged by the right people who know how to suggest the right books. The best way to maintain a good relationship with reading is sincerity in aesthetic pleasure, says Borghesi” , concludes Gentjan’s argument.

A part of the respondents emphasized that the desire to read has been lost, especially in Albanian language publications, a fact that is confirmed by the preferences in English language publications. This comes as a result of the translation into Albanian, criticizing the adaptation, according to which it leaves much to be desired.

The capital’s bookstores are often a stopping point for me. This time, I had to visit some of them, where I faced a low number of interested people at the “stations” where books are sold. Instead, young people and adults are seen every day more and more in cafes. A concrete example comes in the Adrion bookstore, next to the National Library. ” The interest this summer has been greater, because of the season and people definitely want to have at least one book to read“, says the bookseller of Adrion. Young people, according to her, turn to English-language publications, the middle-aged prefer classics, while the old stay more on philosophy, history and motivational books. There are a handful of people in the bookstore, while the adjacent cafes are full.

A gentleman in his 70s, a member of the library since 1999 and a reader of books, expresses his belief in the power of reading. Sitting in a chair, he takes a chance to pick up a book, also take notes.

“The forms of this state are outdated. We need to find ways to support young writers, this is because the public good is a concept of modernism” , he tells me. 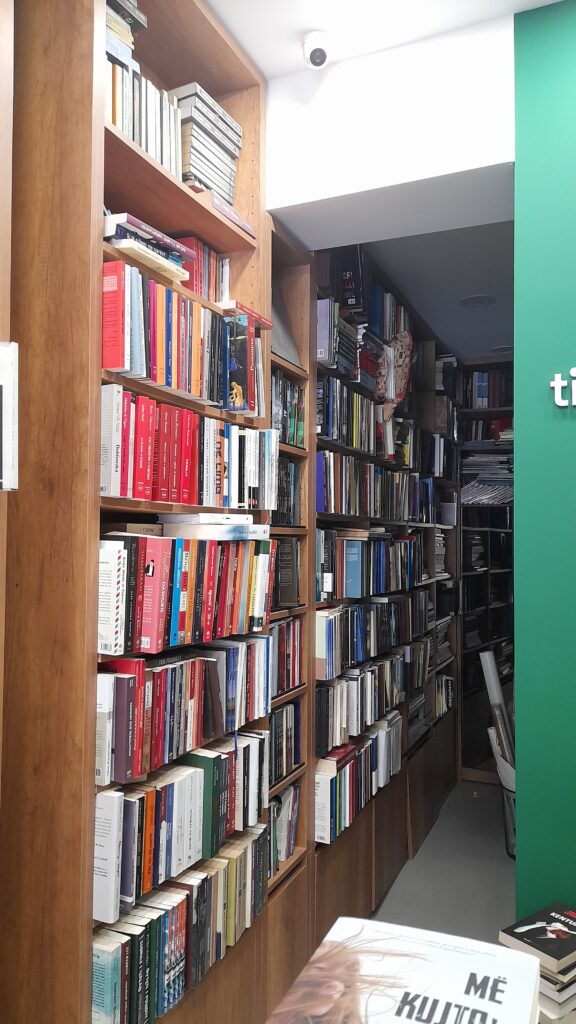 Another bookstore where the situation is the same is Albas, near Toptan. A place rich in good books, but with very few young people frequenting it. “Not many young people come, mostly they are elderly and children. Commercial books are more preferred, there are few people who read really good books”, explains the Alba bookseller. This also happens in Bookland, Tirana Book and in every bookstore in the city. Despite the quality of the books, the interest of young people is not the same as before.

Writers versus readers, the fragile relationship between them

“The writer’s mind often resembles a morgue and a cemetery. Most of the characters that appear in his mind, like shadows at midnight, usually turn back into the mysterious nothingness from which they came. Very few of them survive the annihilation. The survivors, if they are lucky, turn into words” , it is written in the excerpt taken from the book “I keqi i vetes”, by Gazmend Kapllani .

Like Gazment Kapllani there are many others, including Alban Tufa , Katerina Haxhiaj , Hamdi Skeja and Urime Straka, who have chosen writing to be closer to the readers. Communicating with readers through writing is the way they get to know society, for their approach to reality. “The writer’s work is not appreciated today. It is too hard. Like many others, he has to work two jobs to survive. He must write, find a publisher and spend the money he receives in those two jobs, which he has considered” , says Alban Tufa, author of the books “An evening like last night” and “L-shaped moles” who believes that poetry makes people better , a statement he gave some time ago in an interview with ABC News.

Urime Straka says that the spoken language is hindered by physical distances and the book is a work that never dies, so sooner or later it passes into the hands of people. “If he finds the right ground to promote himself and his art, it can be appreciated. But it becomes difficult to find spaces in conveying the message, this is because young writers are not read, appreciated or even trusted” .

Erion Kristo, teacher and translator of children’s books, tells about the relationship he has with readers. “The reason why I translate children’s books is because I believe in them, in their future. I believe in the expression that I created: “Oh man of mind! What did you do for the children of your country?”. According to him, the role of parents is essential. “They can cultivate their desire to read from the first years of life. Their voice is medicine and therapy. When they go to school, this habit is created and the role of teachers comes to reinforce it. Often parents do not have the proper training, while teachers can replace this role very easily and profitably.”

With the many developments in technology, reading has also been transformed visually, where books can be easily read online. Such a change makes it easier for them to spend physical time by ordering online. However, the sensations of a physical book are not described with the online one. Regarding this change, Tufa has his criticisms about the lack of desire that young people have to spend time with books. ” There are two types of youth that have existed throughout history; those who do not read and have no intellectual pretensions and those who have many intellectual pretensions and read constantly. No matter how much is read, it is read too little compared to what I expect, it is also poorly read and more is talked about reading than reading itself.

Straka says that most spaces are occupied by cafes where young people spend time there, instead of picking up a book to read. “It is forgotten as a concept, it is considered stupid if a young person is caught reading, writing or studying, being sold as extraordinary thinking”.

Author Katerina Haxhiaj thinks the same, who says that the world has moved on with its developments, while young people have stagnated, not devoting time to books. “Their interest has fallen, they rank more after attention and the perfect life. The Internet is gaining ground, but the book stays there, giving you a different feeling when you see it in the library”.

Poor reading happens for a variety of reasons. Alban Tufa lists some of them: “First, on a general level, the conventional value of knowledge has fallen. People, especially young people, try to build a life that brings them only wealth and material goods. Technologies, media are destroying all our previous relationships, even the one with reading; the latter is closely related to misreading. If one were faced with good literature, one would dig further. The contrary is happening, the further away from it. This situation has its genesis from early on, education with reading in childhood, schools and gymnasiums that is generally not done, but even when it is done, it is done badly. Economic conditions. A good book can cost 10-20 thousand ALL. There are many other social factors, but mostly they are related to the lack of libraries,” he said.

Juventina Ngjela , sociologist, says that there has been a decrease in the number of people interested in buying, on the other side they prefer to borrow them to occupy their free time, mainly with artistic books. “The reasons that lead to little reading time begin with travel, family outings, long hours of work and double work that is evident from year to year. These lead to insufficient time to read,” she explains.

Hamdi Skeja, author of four books, says that reading is spiritual food and horizons. “I am against digitization. There is no soul of reading online as you read in paper. There is another feeling, life and emotions; they often make you cry. How can it transmit emotion, something that you do not touch? Can a love, without presence and without touch, give the fire of the opposite?”, he argues.

Who is responsible for this intellectual crisis?

Reading has become a big dilemma in the country, even more so when it comes to young people. As if that were not enough, writers find it difficult to adapt to a terrain where there are no readers. Stanka charges the parents with responsibility since they are not showing proper care to their children: “If parents will change the approach to education towards children, I hope that reading will be seen in the future as something more fruitful”.

Erion Kristo points out the problem of young people looking down on those who bother to read. “I requested that the reading be called a matter of national security and be discussed in the Security Council, but those who are there have no idea about security. We cannot leave reading in the hands of the awareness of a few people, without creating special national programs that cost much less than a kilometer of asphalt”, he assesses.

The book, a friend that doesn’t abandon you even in the coldest seasons, when you need it the most.

Despite the recent developments that our country has known, reading books cannot be ignored, because their number and quality are there, waiting to be bought by the curious and inquisitive young people.

As Mariana Misha , the manager of the Adrion bookstore, who lives and works among books, says, reading is what brings a family together: “During the pandemic, the relationship with the book became more sensitive. It became part of the families creating a warmer bond between them. Here the trend is like that in the world. The book is the best friend in silence, everywhere with you!”.

Share
Facebook
Twitter
WhatsApp
Previous article“The future rises in the West”, the departure of the youth is “graying” Albania
Next articleFake profiles, the daily bread of propaganda!
Investigative Journalism Lab